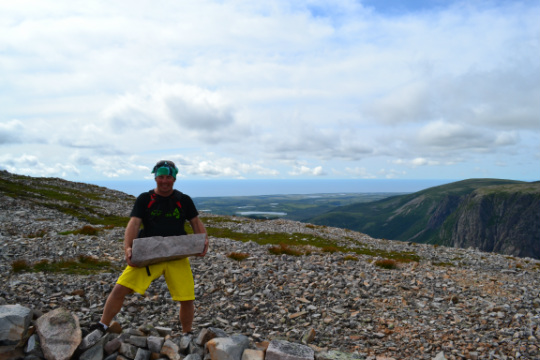 Franklin checking out the Quartzite deposits in Gros Morne National Park, Newfoundland, CA
Franklin Smith, Owner
I was born in Chattanooga TN, surrounded by the massive sandstone and limestone deposits of the Cumberland Plateau and Tenessee Valley.  I discovered a love for outdoor pursuits, especially kayaking down the nearby boulder-strewn creeks.  My passion for the outdoors took me on a series of trips out West, where my fascination with stone and Geology became more of an obsession.  When I turned 18 I moved to Boone, NC to attend Appalachian State University, where  I studied Biology and Geology from 1996- 2000.  I  decided to turn my love of stone and stonework into a career and worked with local stonemasons Sean Sweeney, Bob Gow, Roy Vance, and Tom Gingrich to learn the trade.  I started Living Stone Masonry in 2008, and have worked on a wide variety of projects in the years since.  I am actively involved in the Stone Foundation, an international stonemasonry organization (http://stonefoundation.org/) which hosts yearly symposiums, and a member of the DSWA (Drystone Walling Association of Great Britain). I now live in West Asheville with my girlfriend, Melissa and my dog ( Living Stone mascot) Layla, and enjoy Swing dancing to live jazz when not building with stone.

Will stands beside a section of wall we built in Rutland, VT with Mora Stone.
Will Waller, Stonemason
Will grew up near Philadelphia, PA before moving to Arizona to attend Prescott College. While there, he found a love for stonework during a Summer job with the Forest Service. He moved to Asheville and joined the Living Stone crew in 2013 and his steady nature and quick wit make him the glue that holds the crew together. When not at work, Will travels to visit family and plays guitar. He lives in Black Mountain with his girlfriend, Alyssa and their two cats.